The title Moll Map Collection does not capture the character of the set in an ideal way. It would be better described using the contemporary designation of atlas. Since the atlas usually mingles two ways of depicting areas or places - a realistic view of a building or city in detail (i.e. a classic veduta), and a two-dimensional plan of the surface using a symbolic representation for larger areas (i.e. a map). The transition between the topographical and cartographic approach was not sharp, as exemplified by bird's eye views of cities which maintain the form of individual buildings, but also clearly depict street networks, or cartouches with vedute that often accompanied plans of cities.

Mirko Riedl, who comprehensively dealt with vedute from the Moll Collection, states nearly 7,000 items. While this figure is relative due to the blurred boundary of the term, it quite clearly shows that maps in today's sense, comprise only about half of the entire collection and vedute present a quantitatively equivalent item. The Brno collection contained in the Moll atlas offers a representative cross-section of vedute from the 16th century, when the first large collections of views of cities (and the first map atlases) began to emerge, up to the mid-18th century, when the author of the collection lived. With the work of Georg Braun Civitates Orbis Terrarum, a graphic parallel to contemporary Mercator's map project Theatrum Orbis Terrarum, a veduta became one of the possible ways in which to comprehend the world around. Copperplate technology secured even greater success for Braun than Münster had experienced years prior with his cosmography. The accuracy and sharpness the technology offered for detail, and certainly also greater durability in comparison to woodcuts, were the key to its success.

Dozens of Braun's images of European cities with the typical figure staffage of a couple in regional dress represent the oldest layer of vedute that Moll assembled. Certainly the largest in number are the sets of engravings from the workshop of the Merian family from Frankfurt am Main in the Moll atlases. This company's engravers and draughtsmen documented the face of the principal cities of Europe in many editions (one cannot help mentioning here the sorrow with which the cataloguers often had to resign on precise dating). The first editions of the individual volumes of their Topographies were published from the 1630s to 1660s, at a time when many waves of rival armies of the Thirty Years War swept the continent. These partially etched views of the cities accompanied by small figures of peasants, merchants, pilgrims, or soldiers, are not as impressive as Callot's well-known engravings, yet poses a distinctive charm and most importantly, are of great documentary and historical value. The influence of Merian's engravings was so significant that imitations of his works, mainly from the workshops of Gabriel Bodeneher or Pieter van der Aa continued to be published as late as the mid-18th century. There are vedute in the Moll Collection from this period from the workshops of Joseph Friedrich and Johann Christian Leopold or Jeremias Wolff (engraved and drawn by Friedrich Bernhard Werner who came from Silesia). There was a considerable decline in the classic veduta in the first half of the 18th century in favour of the depiction of palaces and churches, gardens, city streets, and interiors. 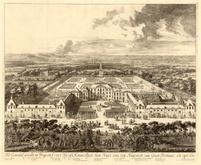 These collections are contained in the volumes of the Moll Collection dedicated to Rome (and Italy in general), Vienna, and the Austrian Netherlands. Besides the aforementioned Werner, (author of, among others, the collection of views from Austrian monasteries), the engravings by Austrian authors Salomon Kleiner and Joseph Emanuel Fischer von Erlach, which put the viewer directly in front of palaces and temples of Baroque Vienna, stand out. Even more interesting still are then the works from the Dutch and Italian environment. Danckerts', Allard's, Valk's, or Van Call's engravings of the Het Loo Castle gardens or views of the same Gerard Valk at residences in Honslaardijk or Soestdijk, can in many ways compare to the better known engravings from the Italian environment where the beauty of architecture is more technically conceived. The works of Giovanni Battista Falda dedicated to Roman gardens, fountains, and palaces (the last with Pietro Ferreiriem) or Werner's insights into the Florentine environment are sought after by art historians until today due to their excellent state of preservation. 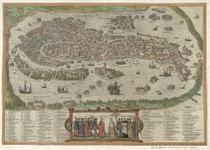 Maps, as the second principal part of the Moll Atlas, represent, just like vedute, development of cartographic work in a given territory for an entire 200 years. The oldest maps date back, similar to vedute, to the 2nd half of the 16th century, when the map definitely shifted from symbolic representation of the world to more or less real transposition of spatial relationships in a landscape onto a surface. Over time, whales and sea monsters disappeared from the surfaces of the sea and animals from the Earth's surface. Symbols were added to the map field, and the image was, in the 17th century, supplemented with a framework of geographic coordinates, subsequently in the 18th century with graph coordinates. The method of depiction of land surface features, based on a simple rounded dome shape for mountains was replaced by a more accurate method of hatching to draw slopes. Arithmetic, however, did not take over the map sheet's entire space. Originally austere title cartouches decorated at first simply with masks and no more than a simple geometric motif were from the mid-17th century surrounded by allegorical copperplate engravings. Horns of Plenty, symbols of military successes, or personifications of represented countries were supplemented by rich heraldic decoration, graphic scales were adorned with puti or angels with cartographic tools. Cartouches used to be enriched with the portrait of a dedicatee. Despite these changes in the artistic treatment, the content value of the map sheet often remains the same. The same plate was often engraved several times over, to bring profit to its publisher under a new title and dating. Particularly from the mid-17th century, collections of identical maps with different cartouches became increasingly frequent. Map works, just like vedute, represent a cross-section of European production from the 16th to the 18th centuries. Individual pieces of foundational works by Ortelius are supplemented for the 17th century with works of a great number of Dutch cartographers – here we may just mention the Amsterdam families of Visschers, Janssoniuses, Schenks, Blaeus. Amsterdam remained the Mecca of cartography in the next century as well. 18th century Dutch cartography is represented with hundreds of works from companies like Covens & Mortier, or families like Ottense and Schenk. Despite its undisputed importance, Amsterdam gradually lost its monopoly. Paris moved into the lead position headed by the Sanson and Delisle families. The symbol of German cartography became Nuremberg, Johann Baptist Homann and his heirs published atlases throughout the whole century, which served as models for many of their competitors. Besides the Homann family, the workshops of Matthäus Seutter and Christoph Weigel could be found in Nuremberg. Augsburg was also an important centre with the works of Tobias Conrad Lotter. As for Italian cartographers, we should at the very least mention Giovanni Giacomo De Rossi whose workshop was located in Rome.

As for the themes, beyond the traditional political map we can distinguish in the Moll Collection between several thematic areas. The most important group are maps of battlefields and sieges of cities. Already in Merian's work there were several depictions of battles from the Thirty Years War, most plans of battlefields assembled by Moll were, however, of a more recent date. They especially depict the wars with Turks along the entire military frontier in the Balkans. Northern Italy, and the Franco-imperial boundaries became sites of other battles. Sometimes the plans merely show the position of armies and lines of main attacks, sometimes there are also artillery ammunition tracks, burning cities, or figures of soldiers. The analysis of manuscript maps and plans that Moll collected from these areas are deserving of a more detailed study rather than just merely being mentioned. Certainly they are in part mere manuscript copies of existing printed maps. If, however, some of the plans are original works, which Moll could have acquired during his stay in Vienna from officers who personally participated in the fighting, then it would change the overall evaluation of the importance of the Moll atlases.